"Ta'u Pupu'a, an ex-pro football player, made a strapping Pinkerton. You hardly expect the big, very tender tenor he produces. Together, the two singers brought the pre-nuptial (Bimba, bimba and Viene la sera) to an electrified place. Pinkerton is a feckless cad, but with Pupu'a's honeyed tones, he sounds so human, it's hard to hate him.
Michael J. Fressola, Staten Island Advance - Fine Philharmonic, May 1, 2007

"Pinkerton, sung by Ta'u Pupu'a, was charming when seducing Cio-Cio-San, and cavalier when returning after his absence in America. His voice was powerful, yet controlled, as his gestures were minimal, yet expressive. His stage presence was well-suited to the role of Pinkerton. a man who knows how to appear sensitive around women in order to get what he wants."
Gary Sheinfeld, Boro Park Community News, December 2006

"Another in the same mold but with a totally different voice was guest artist Tau Pupua. Tau has a young, thrilling, really big tenor voice that promises to develop into one of true star quality, especially when you add in the good looks and physique of someone who only recently played in the NFL for the Baltimore Ravens before a career ending injury. If you missed him at Pindar, make a date for the JohnDrewTheater at Guild Hall in East Hampton on Saturday September 9th when he will sing the role of Lt Pinkerton in the ever-popular classic opera Madama Butterfly - I don't think you'll be disappointed."

Omaha/Robert in Heart of a Soldier, San Francisco Opera

"Much of the burden for making this audacious project work fell on the broad shoulders of Ta'u Pupu'a, who made an excellent Radamès. In act four, he sustained many of the staging's most extreme decisions, including being water boarded, then strapped to a gurney and forced to sing (and die) while suspended in the air."
Charles Donelon, The Independent, March 4, 2013

"Radamès, the Egyptian hero, was sung by Ta'u Pupu'a, a tenor from Tonga who played for the Cleveland Browns before suffering a foot injury and exchanging the NFL for the Juilliard School. He has a powerful voice (how could he not?)..."
Mark Swed, The LA Times, March 4, 2013

"[Aida] had powerful allies, as well, in the critical triangular roles... the vulnerable and volatile performance of the loveaddled Radamès, tenor Ta'u Pupu'a (an NFL athlete whose injuries forced him into this "fallback" profession - in opera)."
Josef Woodard, Santa Barbara News-Press, March 6, 2013​

"Her counterpart, Ta'u Pupu'a as the Tenor and Bacchus, was something else again. A football hero at Weber State University in Ogden, Utah, he flirted briefly with the N.F.L. before succumbing to an injury. To judge from his singing, he has not abandoned his iron-pumping regimen. He seems to have limitless power, so far not entirely tamed. But the voice has real gold in its best moments, with none of the blowsiness we have had to settle for in so many recent 'heldentenors.'"
James R. Oestreich, The New York Times, Aug 3, 2010

"There is not a weak link in the cast of Tanglewood Fellows...The tenor Ta'u Pupua, a tall and handsome Bacchus, grew in vocal strength and by the end of the love duet was making a truly heroic sound."

"But if Williams's gorgeous, beguiling virtual contralto timbres move one to the core, the two tenors were a revelation too. Ta'u Pupu'a, a Polynesian from Tonga, was heard in the United States by Kiri te Kanawa, who was the driving force behind him earning a scholarship to the Juilliard School in New York. His career has blossomed since that lucky chance. He's a big presence, muscular, strong, dominant, a driving personality that proved just perfect for this strutting peacock of a character, showing off his wares in a fiery-coloured cloak like a Shakespeare comedian, as the amorous Olympion. The sound is a big one too, a big, meaty voice that would cope comfortably with Wagner or Verdi. And he is so in control of the tenor range - high, low, medium - that one gets a thrill from hearing him in full flow. It's not just a weighty sound; it's an alluring one."
Roderic Dunnett, Behindthearras.com, April 14, 2015​ 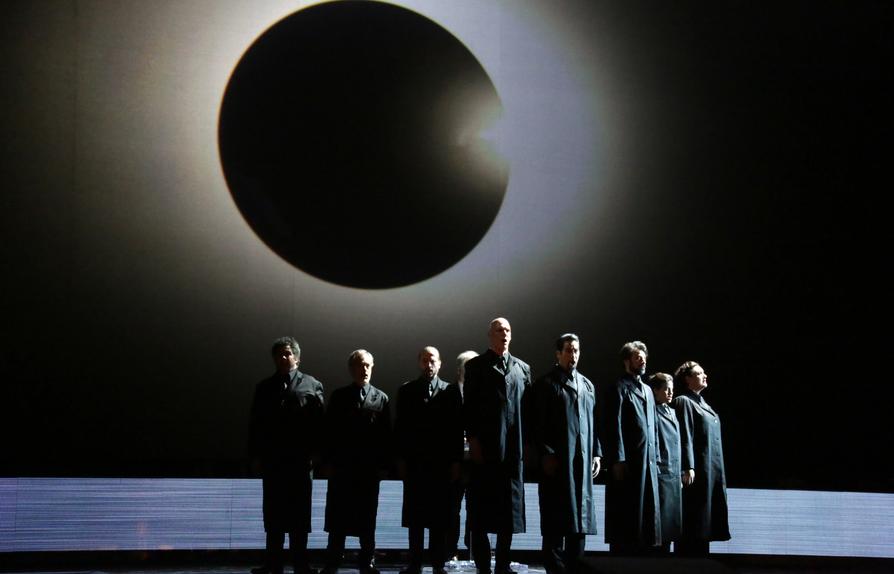 Ta'u Pupu'a in the World Premier of "CO2" by Giorgio Battistelli, La Scala, 2015

The Duke in Rigoletto

"His first act aria "Questa o quella" was sung with brilliant tone, insouciance and elan. Papua's (sic) singing of his Act 2 aria "Parmi veder le lagrime" was well done...If he could somehow sustain his highest capabilities he would be a mighty force. Papua's singing of the crowd pleasing "La donna e mobile" was sung with ringing tone and a beautiful cadenza at the end. One hopes he has the patience to go slowly and nurture his career. Tau Papua is a tenor to watch."
Nino Pantano, Italian Tribune, June 7, 2007

..."This [Turandot] is a masterpiece of casting, costuming, makeup, lighting, scenery, movement and direction, with stellar musicianship onstage and from Orchestra Iowa under the baton of Opera Theatre founder Daniel Kleinknecht. The production — an unimaginable love story set in legendary China — opened to wild cheers and an instant standing ovation Friday night at the Paramount Theatre, and repeats there Sunday afternoon. Do not miss it. ...

...Ta’u Pupu’a of New York — by way of Tonga and Utah — is every inch her [Turandot's] match in bearing and voice. Prior to Pupu’a’s 2017 performance with the Cedar Rapids Opera Theatre, Kleinknecht called the former NFL player turned Juilliard graduate “a great tenor with a huge instrument,” adding that “he might be the largest-voiced person I’ve ever heard in my entire life.”

Together, the stars ignite the stage..."

Ta'u Pupu'a as Calaf cut a noble figure as the determined prince, brandishing his heroic tenor with panache. His Calaf was a fine example of effortless singing, as he sustained crystalline high notes with ease and expertly navigated treacherous phrases, cutting off at the last possible moment. There was never any question as to whether he would succeed but as the pressure built toward that legendary aria, Nessun Dorma, the audience inched forward in their seats, erupting into cheers as Mr. Pupu'a radiated against a starry sky.

Ta'u Pupu'a - From the NFL to the Opera,
Tonga's Leading Tenor

"The role of the artist Mario Cavaradossi was sung by tenor Ta'u Pupu'a. Pupu'a was born in Tonga in the South Pacific, but has lived in the United States since the age of two. He was an NFL football player but after an injury he turned to his other great love: singing. Lucky for us! In the opening aria "Recondita armonia" everyone took notice at his brilliant tone, breath-control and ravishing, powerful tenor. At the conclusion of the aria his "Tosca, sei tu" evoked memories of opera's golden age. His jealousy duet with Tosca was beautifully sung. Cavaradossi's prolonged cry of "Vittoria" in the second act was a never ending tapestry of gold flooding Regina Hall, and his cries during the torture scene were riveting. In the final act Pupu'a's heartfelt and ardent "E lucevan le stelle" was the stuff of legend, earning him a huge ovation. His singing of "O dolci mani" with his beloved Tosca culminated in another ringing finale with Victoria Tralongo in a perfect blend. His is a voice that with the right guidance will conquer the opera world. Add to this the fact that he is athletic, young, tall and handsome and it is an irresistible combination."

"...She [Director Candace Evans] has taken a cast of marvelous musicians and turned them into fine comedic and dramatic actors, breaking away from a presentational style and infusing them with equal parts playfulness and pathos surrounding the two tales of lust, betrayal and revenge.

Leading the charge is Ta’u Pupu’a of New York City, by way of Tonga, Utah and the Cleveland Browns. The former NFL defensive end from the mid-1990s is just as big a star on the stage as he was on the football field, before an injury forced him to seek another career path. His booming, resonant tenor voice is as commanding as his 6-foot-5-inch frame, when he embodies the doomed lover in the first opera and the betrayed husband who exacts revenge in the other.

The crushing weight of his grief pours through his instantly recognizable aria in “Pagliacci,” after he discovers that the dalliance his wife portrays onstage with their traveling troupe of actors is no act. She has betrayed him in real life, too. Suzanne Vinnik is ravishing as his unfaithful wife, her fiery soprano every inch his artistic match."
Diana Nolan, The Gazette (Iowa) January 14, 2017