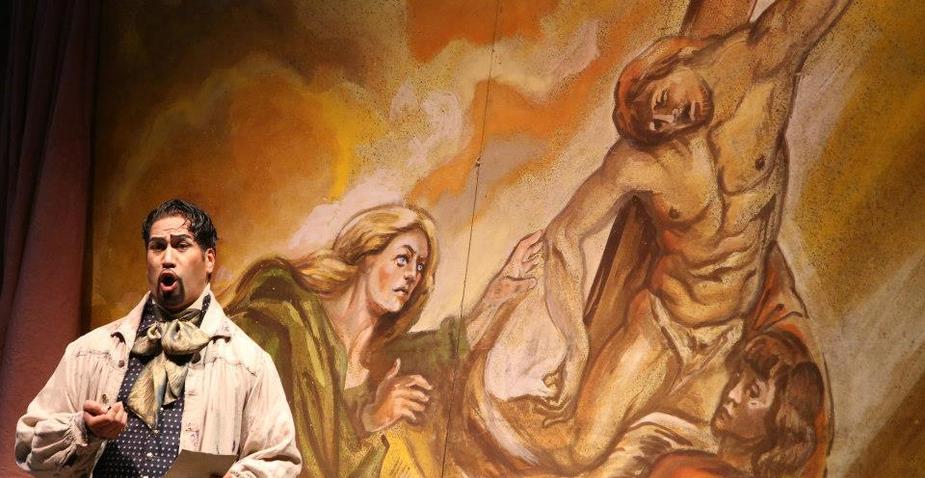 Unique in the opera world, Ta’u Pupu’a was an outstanding NFL Defensive End, until a career-ending injury changed his life and led him to a new career - opera. A Juilliard Opera Center (ADOS) graduate, he is a native of the Polynesian Kingdom of Tonga. Pupu’a attended Weber State University in Utah on a football scholarship while pursuing a Bachelor of Music degree, during which time he was drafted to the NFL by Coach Bill Belichick of the Cleveland Browns, and later the Baltimore Ravens. After sustaining his injury, he changed career direction to follow his passion.

He is just as outstanding in his role as operatic tenor, as shown by the following acclaim:  "...He seems to have limitless power... but the voice has real gold in its best moments." (New York Times) "...Everyone took notice at his brilliant tone, breath-control and ravishing, powerful tenor..."  (Italian Tribune), ​"In the treacherous heldentenor role of Bacchus, Ta'u Pupu'a brought reserves of stentorian power and heroic strength, singing gloriously." (Classical Review), "...​The sound is a big one too, a big, meaty voice that would cope comfortably with Wagner or Verdi. And he is so in control of the tenor range - high, low, medium - that one gets a thrill from hearing him in full flow. It's not just a weighty sound; it's an alluring one." (Behindthearras.com)

Future engagements include Beethoven’s Symphony No. 9 for Hawaii Symphony Orchestra, in conjunction with other recitals in Honolulu. In 2020, Ta’u Pupu’a will sing the title role in the world premier of Tim Finn’s (Split Enz and Crowded House) Star Navigator, making his Australian debut for West Australian Opera. Recently, he performed Bacchus in Ariadne auf Naxos for the Festival of the Aegean, in Greece, Pinkerton in Madama Butterfly for Opera Connecticut, and concerts in Utah and Florida.

Pupu’a was a recipient of the Richard F. Gold Career Grant while undertaking the ADOS program at Juilliard Opera Center. During this time Mr. Pupu'a studied in Italy at the George Solti Bel Canto Academy, under his mentor Kiri Te Kanawa, performing with her in concert and recital. He was awarded an encouragement award by the Giulio Gari Foundation vocal competition, and multiple study grants from the Olga Forrai Foundation.

Upon graduation Pupu’a embarked on his career, appearing across the USA, and internationally, in opera and concert. Mr. Pupu'a made his professional opera debut, with San Francisco Opera in their 2011 world premier production of Heart of a Soldier, followed by a piano recital for Weber State University, and the role of Dr. Caius in excerpts from Falstaff for the Richard Tucker Gala at Avery Fisher Hall. 2012 marked his European debut as Bacchus in Ariadne auf Naxos with Theater und Orchester Heidelberg. He later made his British debut in Birmingham Opera's acclaimed production of Tippett's The Ice Break, directed by Graham Vick, as well as Robert Carsen’s world premier production of Giorgio Battistelli's CO2, at La Scala, Milan. He performed concerts in China, in Macau and Beijing, for the Asia America Opera Association Festival as well as Strauss’ Salome for Hong Kong Opera, and Bacchus in a concert version of Ariadne auf Naxos at the Danish Radio Concert Hall.